Consistent. Decisive. Reliable. These are all words that apply to Mike Haggerty.

If you need convincing, just take a look at his long and successful track record. From his home life (he’s married to his high school sweetheart and he’s lived in the same neighborhood for twenty years) to his work life (he joined Jackson Walker right out of law school) this is a man who puts down roots and sticks to his word. 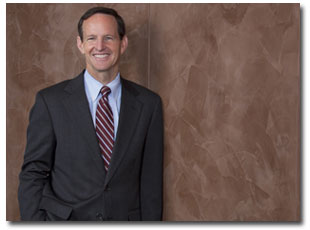 “Some might call that boring,” says Mike, whose unswerving path at JW led him to partnership and to leading the firm’s Financial Services practice group. But it’s a sure bet that his clients call it “constancy.” And in the complex, ever-evolving world of financial transactions, that kind of proven steadfastness is both an asset and a comfort.

Mike’s work revolves around representing the various parties in financial transactions – particularly banks and other lenders. He focuses in mortgage lending matters, facilitating loans to office, retail, industrial, and multi-family property developers. It’s a field that is becoming ever more demanding.

“The mortgage lending work we do becomes increasingly more sophisticated as the financial markets evolve,” Mike says. “Initially, all of our work involved a single property with a single lender with straightforward terms. We still do that type of work, but we also have many transactions that include multiple properties in multiple states, with various pricing options and financial covenants.”

And the complexity of these transactions isn’t the only thing that’s increasing — their numbers are growing rapidly, too. In 2006 alone, Jackson Walker’s Financial Services group completed nearly 100 mortgage lending transactions totaling about $1.4 billion in funds.

In a business this fast-moving, experience counts – and that’s another area where Mike’s unwavering commitment has paid off. His undergraduate degree in accounting and his pre-law-school work at First National Bank of Atlanta set him on a path that he continued upon joining Jackson Walker. “Representing banks was a natural choice for me,” he says. And indeed, he has been representing the largest commercial bank in the United States – Bank of America – and its predecessors since he first came to the firm.

“I’ve thought through these issues before and I can tell clients — here are the alternative solutions.”
— Mike Haggerty

That may be his largest client, but it’s certainly not his only long-term client. In addition to big corporations, Mike also represents a select number of individuals and small businesses. “In one instance, I represent a friend who owns his own company, and I represented his father before him,” he says. “That work tends to be very personal and rewarding.”

His long exposure to the industry — from large and small business perspectives – has given him the foresight to spot problems before they pose serious risks and to recommend ways around them. “I’ve thought through these issues before,” Mike says, “and I can tell clients – here are the alternative solutions.”

In a world and a business where everything changes, it’s nice to know some things won’t. Mike Haggerty’s deep knowledge of the industry and his commitment to clients are two things that will never be in doubt.