Fred was an exceptional lawyer with vast experience in administrative law who played a pivotal role in shaping the Texas insurance code. He was also a deeply respected member of his community, a beloved father and grandfather, and a good friend. 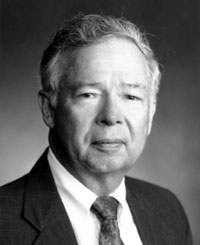 Fred was born on February 21, 1926, and raised in Austin, Texas. He earned his Bachelor of Laws degree from the University of Texas in 1950 and thereafter joined the Office of the Attorney General of Texas, where he was an Assistant Attorney General for the state and Division Chief for the Insurance, Securities and Corporate Section. He later joined with other notable Austin attorneys, including Texas State Senator Charlie Herring, in private practice.

“We set up Herring and Werkenthin next door to Small, Small, and Craig,” Fred remembered in an interview in 2012. “Then Bob Shannon came along and wanted to join us. Before long, we decided to merge the two firms, so we knocked the walls down between us and became Small, Herring, Craig, Werkenthin, and Shannon.”

With Fred as managing partner, the firm soon grew into one of the state’s most prestigious law firms, with specialties in many areas of civil law including the financial, insurance, government, and legal sectors. “He ran our law firm through all its iterations, keeping us balanced and competitive, and he made sure we did things the right way,” said partner Ed Small. The firm of Small, Craig and Werkenthin merged with Jackson Walker in 1999, a development that Fred considered “a win-win situation.”

Fred represented many large insurance companies before the Texas Department of Insurance and the Comptroller for the State of Texas. Some of his clients included Farmers Insurance Group, New York Life Insurance Company, and Metropolitan Life Insurance Company. His work representing the Lower Colorado River Authority in the controversial 1985 Stacy Dam project was the most significant water rights case to be tried in the last 50 years. Fighting the case all the way to the Texas Supreme Court, he prevailed, although a subsequent compromise allowed for the building of the dam. In his later years, Fred was often consulted by both insurance companies and state legislators on the interpretation and wording of insurance legislation and was considered highly experienced on the legislative history of various insurance legislation.

Those who worked most closely with him characterized him as eminently fair-minded and enthusiastically competitive. “He was a tenacious litigator,” says Ed Small. “I learned real fast that I didn’t want to be in the courtroom at the same time he was… He practiced law for the benefit of being successful, but also did things the right way. He treated people the right way.”

While Fred was understandably proud of his many professional accomplishments, he was also a devoted family man who loved spending time with his sons, Fred Jr. and Gregg, his daughters, Linda and Becky, and his grandchildren. He loved tennis and was an avid player at Westwood Country Club. Before her passing in 2004, Fred and his late wife, Mary Margaret Werkenthin, especially loved fishing trips to Port Aransas, where family legend says that Mary Margaret was never out-fished by Fred.

To Fred’s family and friends, the lawyers and staff at Jackson Walker extend our sympathies. Those of us who were fortunate to have Fred as a friend and colleague will never forget his ethical spirit, his good humor, and his legacy of excellence in the practice of law. He will be missed.

A memorial service will be held at 11 a.m. on Saturday, December 12, 2015, at St. David’s Episcopal Church, 301 E. 8th Street in Austin, Texas. The family asks that in lieu of flowers, contributions be made to Hospice Austin or the charity of your choice.