Scott Rose is in it for the challenge.

He’s been involved in a commercial banking practice since he graduated from law school, starting off as a bank lending attorney. He learned much about finance in that role, but it wasn’t until several of the loans his clients had made went into default that he began to truly understand the debtor-creditor relationship and how challenging it can be. Congress’ enactment of a radically new bankruptcy law made things even more interesting. 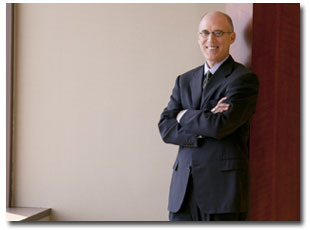 That was back in the mid-1980s, and the Bankruptcy Code was only a few years old. Scott ventured into this new world of bankruptcy court proceedings and realized he’d found his calling – helping lenders recover their funds while trying not to destroy the borrower in the process. Having first been a banking attorney, he felt much better prepared to understand – and apply – the provisions of the bankruptcy law.

“I quickly found that the Code, while a statutory practice, left great latitude for lawyers and judges to work with clients to craft workable solutions to a debtor’s problems,” Scott says. That flexibility – that opportunity for creativity – appealed to Scott then as it still does today.

In his current practice at Jackson Walker, Scott represents mostly banks and other lenders, who come to him when there has been a default by a borrower – or when one is imminent. From there, Scott’s job is both controlling potential damage and finding solutions – by examining the contractual relationship between the debtor and the creditor, and by analyzing the client’s situation and determining the best possible strategy. Sometimes that means gaining control of the collateral for the debt. More often, however, it requires a creative restructuring of the debt. Other times, the solution involves finding a buyer for the borrower or identifying new capital to help the debtor out of difficulty. In every case, it’s about finding the way – the right way.

“Situations come to us very broken and often appearing to be unfixable,” Scott says, “but capable attorneys on both the debtor’s and the creditor’s side can often create solutions that work for all the parties. Creatively solving a client’s problems, in a way that also aids other parties, can be very rewarding.”

This kind of creative thinking can be crucial in large and complex cases. Recently, Scott was called upon to analyze complex issues in the Chrysler and General Motors bankruptcies involving successor liability that could have resulted in substantial losses for his clients. Scott’s team crafted a strategy designed to avoid this unexpected – and even unintended – exposure. Previously, Scott was directly involved in managing the recovery of investors’ funds in a financial fraud case that could be considered a forerunner of the high-profile cases that recently have shaken the financial markets. That matter involved competing bankruptcy cases filed by and against the entities and included insolvency proceedings in four different countries. As complex as the case was, Scott and his colleagues knew there was a solution. As he’s fond of saying, “In bankruptcy law, there is no knot that can’t be untied – because the Code has given us scissors to cut with.”

“In bankruptcy law, there is no knot that can’t be untied – because the Code has given us scissors to cut with.”

Of course, it doesn’t have to be a large case to catch Scott’s interest. “I have often found very interesting professional challenges in smaller cases that involve fewer parties and provide even greater opportunity for creative thinking,” he says. He also enjoys the opportunity to become deeply involved in a client’s business strategy, considering not just the problem at hand, but all the surrounding issues that can make a bankruptcy case so complex.

That’s the kind of challenge Scott relishes. Even in his downtime, he pushes himself, seeking out thought-provoking books and participating in a competitive tennis league. “I enjoy reading and debating ideas. I also enjoy a good tennis match against guys half my age. I think the mental and physical exercise is very good for my practice,” he says.

Creativity, knowledge, and experience are often the keys to solving complicated problems. The love of a good challenge never hurts, but for Scott the final essential ingredient is persistence.

“I don’t consider myself able to build something from nothing,” he says, “but give me something that appears broken, and I will work with it until it is fixed.”

His clients require – and receive – nothing less.