I have just returned from the 40th Anniversary Banquet of the Reporters Committee for Freedom of the Press (RCFP) in New York City, and once again Lucy Dalglish and her organization put together a memorable evening that featured some of the legends of journalism, including the night’s headline honorees, Bob Woodward and Carl Bernstein. The festivities certainly provided opportunities to reminisce about the glory days of news reporting, but those reflections were interlaced with concerns over the changing face and economics of media. 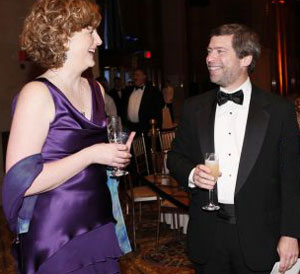 Jackson Walker’s Bob Latham visits with Lucy Dalglish, Executive Director of the Reporters Committee for Freedom of the Press

At the 30th anniversary dinner of the RCFP in 2001 (yes, the 30th anniversary dinner took place in the 31st year of the RCFP), Katharine Graham was the night’s honoree – an evening that became more poignant two months later when she passed away. For this occasion nine years later, another iconic figure in the Watergate drama, Ben Bradlee, at age 88 gave a Ben Bradlee-esque introduction of Mssrs. Woodward and Bernstein. Bernstein immediately paid tribute to his superiors at the Washington Post during the Watergate years, noting that the reporting that earned Woodward and him the Pulitzer Prize would never have been possible without the “courage, smarts and devotion” of Katharine Graham and Ben Bradlee.

What is sometimes lost to history about the reporting of Watergate is the length of time it took to put the story together, as Bernstein reminded the audience. He and Woodward were consistently urged on by Bradlee, albeit in a cautionary fashion: “You don’t have it yet, keep going.” To illustrate the slow progress of the story, one of the early pieces in the developing Watergate saga appeared on page B38 of the paper, which Bernstein wryly noted was “when there was a page B38″ in newspapers.

The question on everyone’s mind, of course, was could a journalistic triumph like that of Watergate, a story that took almost two years to construct, happen today – when news is immediate and where broadcasting, in the words of Lesley Stahl, another of the night’s honorees, has become “narrow casting?” And where will the next generation’s Grahams, Bradlees, Woodwards and Bernsteins come from? While the 40th anniversary celebration was certainly a victory lap for the generation represented by the honorees, there was also a palpable commitment amongst the good and great in journalism in attendance to make sure that the role and integrity of the profession is preserved, and thereby insure that on the 80th anniversary of the Reporters Committee for Freedom of the Press, there will be equally deserving honorees for equally groundbreaking stories. 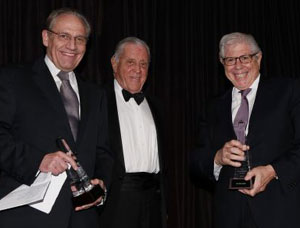 We cannot predict how technology, cultural shifts and economics will continue to affect how and where such stories will come out, but we can identify the qualities of those who did honor to the profession back in the day, and encourage replication of those qualities. And for those who think that journalism’s heyday is in the past, I offer this optimistic historical lesson. The Reporters Committee was founded in 1970, in the wake of reporters being increasingly subpoenaed by governmental authorities and otherwise getting kicked around a bit. In the following four years, journalism rose to perhaps an all-time high, thanks in large part to three of the people in attendance on Tuesday night.

At the end of the evening, Mssrs. Woodward, Bernstein and Bradlee posed for a photo. Someday, such a photo will be taken for the last time. When that happens, it will not be the end of journalism as we know it, but it will be the end of a remarkable era with some remarkable journalistic figures. It was an honor to be among them on this occasion.

— Bob Latham is a partner at Jackson Walker. He can be reached at blatham@jw.com.