Ask Bob Latham‘s clients to describe him and these adjectives come up – “unflappable,” “resourceful,” “quick,” “efficient,” and “versatile.”

No doubt, that’s why Bob is so effective in the courtroom. Simply put, after skillfully trying dozens of cases, Bob knows what works before a judge, jury or court of appeals and what doesn’t. 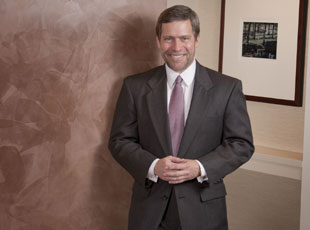 “I think experience allows you to recognize the trajectory of a dispute and get to the endgame more quickly and efficiently,” Bob said. “The key is to stay focused on the client’s goal and then pick your battles accordingly.”

No matter how varied the subject matter or complicated the underlying issues in a case, Bob’s experience enables him to quickly grasp the critical details – and more importantly – to make those accessible to a judge and jury. That ability was on full display during one particular case Bob tried in Dallas; so much so, that it converted a juror into a client. After the jury returned a verdict in favor of Bob’s client, the juror was so impressed with Bob’s handling of the case that he subsequently hired Bob to represent him in a substantial intellectual property matter. To assess the complex technical and scientific concepts involved in that case, Bob assembled a small, tightly-focused team of attorneys and experts and secured a successful result for the client in a highly efficient manner.

“That’s the interesting thing about First Amendment defense: You can argue an issue of a constitutional dimension while embroiled in a street fight.”

In addition to having a former juror as a client, Bob now counts a former judge as a colleague. Over the years, Bob has tried numerous cases in the Eastern District of Texas, a popular venue for patent litigation. Naturally, Bob was thrilled when former Eastern District Chief Judge David Folsom announced that he would join Jackson Walker and lead the Firm’s Texarkana office.

“Having practiced before Judge Folsom, it’s an honor and a privilege that he chose Jackson Walker for the next stage in his career, and I am looking forward to having him as a colleague,” Bob said. “His experience and knowledge will make our team even stronger.”

While Bob’s experience handling complex IP and commercial litigation enables him to bring efficiency to the process, his unique experiences in the area of media law demonstrate his ability to remain calm and collected under pressure. Bob regularly represents newspapers, television networks and stations, and other media concerns in cases involving defense of libel and newsgathering claims. His expertise in this area has placed him on the national stage and, in one case, before a live TV audience. For seven straight weeks on Court TV, Bob and Chip Babcock represented a Houston television station against libel claims brought by a political candidate. “The case had everything – including a faked death – but it was also important journalism,” Bob said. “That’s the interesting thing about First Amendment defense: You can argue an issue of a constitutional dimension while embroiled in a street fight.”

Another aspect of Bob’s practice involves representing sports teams, organizations and athletes in a variety of disputes and licensing matters. He also plays a leadership role in several national and international sports organizations. He is a member of the International Rugby Board Council and recently became the first American elected to the IRB Executive Committee in the organization’s 125-year history. He has also served as a member of the Board of Directors of the U.S. Olympic Committee and remains a member of the NGB Council. He is President of the North American Caribbean Rugby Association and Vice Chairman (and former chairman) of USA Rugby. Bob served a term as President of the Dallas All Sports Association, an organization that brings together the major sport franchises in North Texas to raise money for college scholarships.

A former rugby player himself, Bob sees similarities in the keys to success on the field and in the courtroom. “Both require you to identify strengths and weaknesses so that you can play to the former and compensate for the latter,” he said. “You also have to have the versatility to change the strategy as the game unfolds while never losing sight of the ultimate goal.”

As any coach will tell you, that kind of experience-based intuition makes the difference between a good player and a great one. And as Bob’s clients will tell you, he always leads his team by example, using his knowledge and experience to keep his clients ahead of the game.