Jackson Walker had the honor of hosting a meeting between Ivo Josipovic, President of the Republic of Croatia, and Texas Governor Rick Perry at the firm’s Houston offices on May 15, 2014. 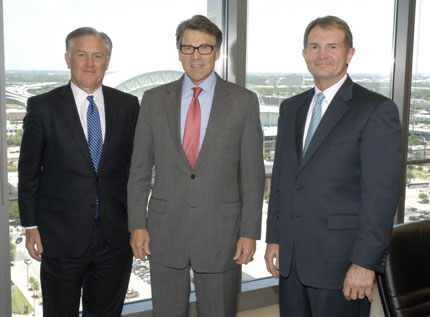 Mr. Josipovic is spending the week in the United States meeting with high–ranking government officials and business executives to discuss energy security and energy projects that are currently under development in Croatia. In April, Croatia opened its first round of offshore oil and gas licenses, which include approximately 14,217 square miles of continental shelf divided into 29 exploration blocks. Since then, the country has been conducting outreach to oil and gas companies to raise awareness about the licensing round, which closes on Nov. 3, 2014. 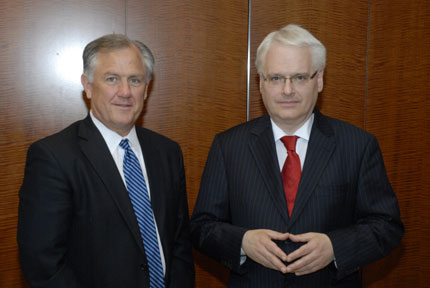 Prior to meeting with Gov. Perry, Mr. Josipovic attended a luncheon with executives from several energy companies that have expressed an interest in the licensing of Croatia’s oil and gas leases. Jackson Walker partner Lisa Powell, who also attended that meeting, said:”President Josipovic convincingly conveyed that Croatia’s commitment to transparency, anti–corruption, the rule of law, and sustainability makes it a very good business partner. He stressed the importance of Croatia meeting the stringent requirements for accession to the EU which demonstrates that Croatia is a good place to do business.”Other members of the Croatian delegation attending the meeting at Jackson Walker included Josip Paro, Ambassador Extraordinary and Plenipotentiary in the U.S.; Josip Buljevic; Consul General in Los Angeles; Vito Tursic, Chief of Staff; Romana Vlahutin, Foreign Affairs Adviser; Tamara Obradovic Mazal, Adviser for Economic Affairs and EU Sectoral Policies; Dubravka Plejic Markovic; Assistant Minister for Extra–European Affairs, Ministry of Foreign Affairs; Petra Furdek, Chief of Presidential Protocol; Barbara Doric, President of the Croatian Hydrocarbon Agency; Philip Berquist, Honorary Consul for Texas; and Nikica Kopacevic II, Secretary for Political Affairs in Washington D.C.During the visit, Jackson Walker firmwide managing partner Wade Cooper presented Mr. Josipovic, who is himself a lawyer and law professor, with a personally signed copy of the book Selected Works of A.W. Walker, Jr., a foundational treatise on oil and gas law written by one of the firm’s founding partners.Later in the evening, Mr. Josipovic spoke about “Croatia and the Changing Map of Europe” at an event hosted by the World Affairs Council of Houston. The program at The Westin Galleria Hotel drew approximately 600 attendees.